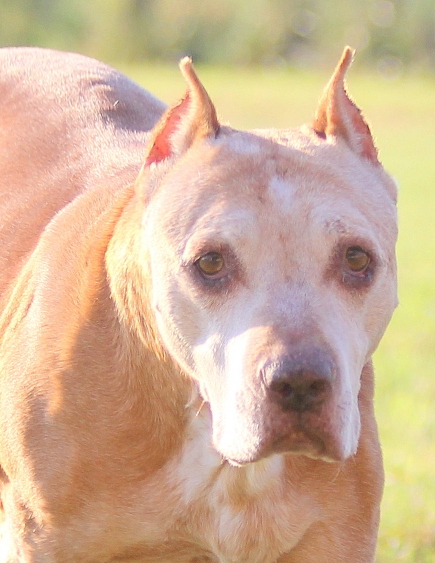 I remember very clearly the first time I saw her. A photo was posted on Facebook with a plea for a senior dog that had been surrendered to City of Tulsa Animal Welfare (TAW). The photo featured a very dignified, rosy-tan female pit bull dog. Her ears were cropped to tiny triangles with sharp little points, her big eyes were calm and looking straight ahead. Her name was Stormy.

Nothing tugs at the heartstrings quite like a senior dog surrendered to fate at an over-crowded city shelter. It is all too often a very sad ending to a long, loyal life. “Someone save her…She looks scared…she looks so sad!” The comments came flooding in.

As I revisited the photo, what I saw was a dog who appeared to be surprisingly calm in the chaos of the shelter environment. She was resting on a cot and the expression on her face was…what? Fear? No. Sorrow? Nope, not that either. The expression I read could only be described as one of patient expectation. This dog was waiting, apparently confident that this turn of events did not represent her final chapter.

I had to respect this dog’s bravado. And what the heck? I had a dog bed to spare and an extra bowl or two. I could easily let this dog come live out her remaining days on the farm with me, my partner Jim, and the furry canine herd that is our family.

I clicked on the comment bar and typed three simple words, “I’ll take her.”

When I arrived at the shelter the following day to claim my new little “grandma dog,” I first stopped in to finalize the adoption with Jean Jenkins, TAW manager.

As always with these cases, my mind was struggling to understand how someone could turn their supposedly beloved dog over to a public shelter. It’s easy to immediately vilify the person; painting a picture of someone callous and uncaring in your mind.

I asked Jean if she knew Stormy’s story. She confirmed she had been present when the woman came in to relinquish ownership of the elderly pit bull. While she didn’t know specific details, she said it was clear that Stormy’s former owner was very upset. Jean understood she had fallen on hard times and could no longer afford to take care of her dog. Apparently, the dog, having been with this woman since she was a tiny puppy, was well-loved.

“She left the shelter in tears,” Jean said with a sympathetic shrug. I tried to imagine a scenario that would force me to surrender my beloved dogs to an uncertain future. Thankfully, I can’t begin to envision anything that would push me to that point. But emotionally, I allowed myself to walk in that woman’s shoes and my heart felt the weight and despair of her situation. I believe this was not a deliberate act of abandonment, but rather a last-resort act of desperation.

Jean and I walked through the heavy, metal door into the main kennel of the shelter. About halfway through the building, Jean turned down a row to the left and stopped at the third pen. There, facing away from us and still lying in a seemingly relaxed fashion on her cot, was my new dog, Stormy. As Jean opened the gate, Stormy turned and as her soft, expressive eyes met mine, her air of expectation so clear to me in her initial photo, was immediately replaced with what I can only describe as recognition.

“Ahhhh, good, you’re here. I’ve been waiting for you,” I could almost hear her say in a voice similar to my memory of my own grandmother’s soothing tone. “Let’s go home now.” And so, I slipped my soft lead over her silver-highlighted head and led her down the main isle of the kennel, a cacophony of barking voices echoing around us as if to cheer her on.

Once in the car, we took a quick, first selfie portrait together to share on the post that had only 24 hours before brought Stormy to my attention. I think I just typed a simple message with it: She’s safe now.

Stormy’s transition into our home was quite honestly very anticlimactic. For an old dog, reported to be into her 16th year, who was so suddenly uprooted and thrust into a totally new and unfamiliar world, Stormy took everything very much in stride. She met each of her new four-legged housemates with a wagging tail and calm demeanor. She wandered around the house and explored the yard, stopping with her nose held high to gather the scent of the horses in the adjoining pasture. She relieved herself appropriately and learned there was a dog door that allowed her to come and go from the house as she pleased. She discovered the water bowl and spent a moment lapping a cool drink before settling into what would become her favorite bed.

Everything about the wise old gal was serene and matter-of-fact, almost as if she already knew this was to be her next and final home. There was no learning curve, no jitters, no confusion. There was only quiet confidence; an immediate acceptance of these new people, these new dogs, and this new place as her family, her home.

That very first night, her sweet silver face popped up over the side of our bed with a questioning, hopeful look in her eyes. “Well, come on up, girl,” I encouraged, patting the open spot beside me. Stormy climbed the little stairs that led onto the bed and settled in by my right side, soon snoring none-too-softly in my ear. This has been her space every night for the 18 months since she arrived and it’s hers for as long as she chooses to stay in this life. Frankly, she is perfectly healthy, has a hearty appetite, and is still full of spunk. I expect to sleep happily crowded for some time to come.

She is very much my dog now, as I believe she was meant to be. Thank you.