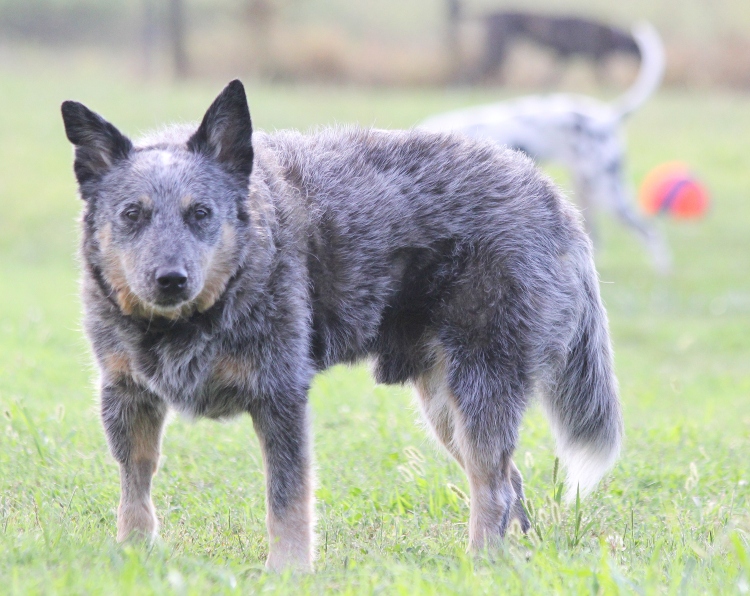 I make breakfast as I do every day. Fast.

When you are feeding 20-plus hungry dogs, fast is a good skill. I realize that last statement places me in the “crazy dog lady” category, and I’m good with it.

What is normal for me and Jim is outlandish to most. Suspect, even. But rest assured, our dogs are well-loved, well cared for, and well spoiled. We run a rescue and foster most of our furry charges ourselves. This means our home is a bit different from most, but it’s also chaotically fun and incredibly snuggly.  Hey, if the Duggers can manage all those kids, whats a couple dozen dogs?

So back to breakfast. I have a system, I know which bowl is going to which dog, I know how much each dog eats. Yeah, I have mad kibble skills. On the other side of the coin, the hungry dogs know the drill as well. They know where they eat, they know in what order they will be served. Newcomers catch on fast. It is the same every single day.

Today, as I set the bowls down, each one in the same order as always, I hit a glitch. Howie’s bowl, Kainan and Snow next, Mickey, and on, and on, until I turn to my left with Boog’s bowl. Boog isn’t there.

Boog always eats just behind where I prep the food and to the left. Only one other time in the history of Boog has his smiling face failed to be in that spot at mealtime. And that turned out to be a bad, scary day.

That was the day we almost lost our boy to a splenic tumor, the silent monster that decided to very suddenly make its terrifying presence known. Thankfully, we knew the symptoms, and thankfully we were able to save his life. (Read the whole story here.) But that tumor turned out to be more than just a one-time unwelcome guest. Boog was diagnosed with hemangiosarcoma, a rapidly growing, highly invasive variety of cancer that occurs almost exclusively in dogs.

Ultrasound also revealed a mass in Boog’s perfect, sweet heart. No biopsy can safely be done, but the logical assumption is that it is the same type of cancer. A cruel double whammy for our special boy.

No dog deserves this diagnosis, but certainly not Boog. He is the boy who captured our hearts from the moment he was born. His mother was our foster dog, Olive. She came to us in a very delicate condition and soon delivered eight healthy little polar bears…Boog the only one to be completely soft white with no patches of color. 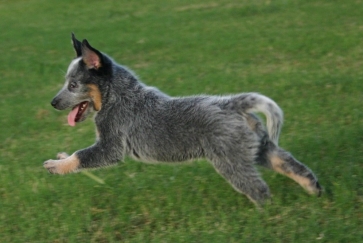 Over the first weeks of their lives it was amazing to watch the overcoat of black or red hairs mixing in with the white to create the trademark blue or red coloring of the cattle dog. Often, I would come home from work to check on Olive and her family only to find seven squirming pups instead of eight. That eighth little guy could always be found nestled on Jim’s shoulder. I knew pretty early on that Boog would not be leaving the farm.

Boog was one of those dogs that just fell perfectly into our world. We never gave him a minute of formal training, yet he has always been the dog that will stick to your heels, leash or no leash, no matter where you go. He is loyal, smart, and quick to figure things out. He’s the dog I can take with me when training with a shy or reactive dog. He is an excellent teacher’s aide. If Boog has a flaw, it’s that he just can’t hold his licker. If you are going to say a close and personal hello to Boog, he may just think your face needs a quick and thorough washing as well.

And now, in an unfair twist of fate, veterniary medicine was trying to tell us our Boog’s prognosis was grim. Statistically speaking, dogs with this type of cancer have a life expectancy of only one to three months post diagnosis. But as far as I can see, Boog does not have an expiration date printed anywhere on his handsome little body. So statistics be damned.

Because Boog’s health is otherwise good, we decided to give chemotherapy a try with the agreement that if it was too hard on him in any way, we would stop. We want our boy’s time in this life to be happy and as care-free as possible. So quality will always rule the day for him.

Boog cruised through his first treatment remarkably well. Three weeks after that, he handled his second treatment like a school boy thumbing his nose at the playground bully. Then, after another three weeks, he had his third treatment. And that brings us to the day, three days post treatment, when Boog was not behind me, to the left, in line for breakfast. And the same was true for dinner that evening.

He was quiet. The switch on his normal full-body squirm was in the off position. He looked at his food bowl with troubled eyes, licking his lips and turning his head away. The cumulative effects of the chemo had finally caught up to him. We had medicine on hand for this possibility to help sooth his queezy stomach. We would help him feel better. Tomorrow he would surely be in his place.

But tomorrow let us down. Once again, when I turned around to my left with food in hand, Boog was absent, once again for both breakfast and dinner. We tried chicken. We tried canned food. We tried. Boog’s sweet face answered with a polite, quiet no-thank-you each time.

The next tomorrow failed us too and I felt my heart getting squeezed just a little tighter with each rejected meal.

It made me question the logic of pushing on. In truth, Boog was not horribly ill. He was not throwing up. He was not completely shut down. It was nothing terribly dramatic. But knowing Boog…well…it was just hard to see him down like that.

On the sixth day post chemo, I stood in my usual spot, surrounded by the normal undulating sea of hungry canine energy. I fixed all of the bowls. placed them in order on the counter. I gave Howie his bowl. I fed Kainan and Snow, Mickey, and so on. Then it was time to turn behind me to the left.

And there, in all of his eager glory, was Boog. His eyes were bright with anticipation. His body vibrating with his trademark, barely contained energy. Boog was ready for his meal.

As soon as I placed the bowl in front of him, he was gobbling his food down with his normal do-I-really-need-to-chew intensity. I stood for a moment reveling in the snarf, crunch, gulp sounds before the impatience of a dozen or so other dogs brought me back to my Flo-the-waitress persona and I continued slinging bowls to my famished patrons.

Boog’s clean bowl on this day was a thing of beauty, especially given the fact that we had just passed the three-month mark post surgery. You know, the mark medical science suggested we wouldn’t likely see. I never was very good at science. Thank goodness Boog doesn’t seem to pay attention to it either.

We have two more chemo appointments ahead. I take a very deep breath every time I think about that. In reality, Boog really is doing well. His blood work is holding steady and I’d say 98% of the time he acts like his normal self. But oh how that 2% twists around in my heart and mind. Math is no more my subject than science, but during this journey 2% seems HUGE at times.

Today, however, we are securely back in our wiggly, hungry, always-behind-me-to-the-left 98% happy place. This place feels very good. I will work hard to not let 2% of doubt overshadow 98% of hope. I think even my past math and science teachers would unanomously applaud that idea.

Hey Boog, I still don’t see any expiration dates on you. See you at dinner, buddy. 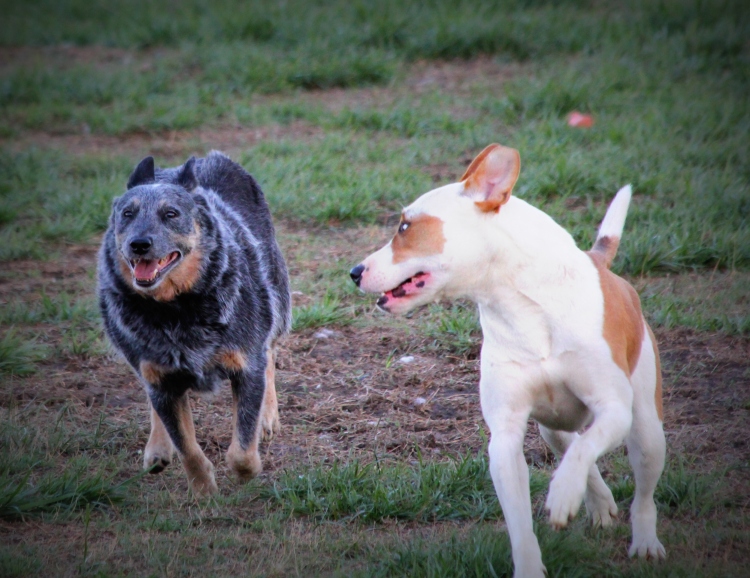