Last Wednesday I headed out at dark:30 for a quick business trip to Las Vegas. Yes it was business. Really.

The flight was scheduled to depart at 6:15. That’s am. In the morning. Ugh.

Oh yeah. And I need to allow time to shower, dress, and attempt to look human.

My late night math on Tuesday evening before the flight determined that I had to set my alarm for 3:30 a.m.

I did pull it all off by promising myself that I would get on the plane and immediately fall back into slumber, well aware that my drifting-off head bobs and “sleeping face” (all slack and yes, I’m a mouth breather. Nose doesn’t work well), would provide good fodder for a few strangers’ Facebook feeds. Fine. The promise of extra sleep trumps all vanity.

I was on Southwest airlines, so no assigned seat, and I was in boarding group “C” on a full flight. The dream of prime snooze-worthy seating (toward the front, by the window) was unrealistic, so the next task was to choose seatmates who would be as equally committed to ignoring me as I would be to shutting them out.

About three-fourths of the way back in the plane, I spotted an aisle seat open, with what I thought was a young couple sitting in the middle and window seats. Score.

If I had been a tad more awake, this configuration would have been a red flag. On Southwest, savvy travelers, whether traveling together or solo, fill the window and the aisle seats first, hoping to dissuade people from filling in the dreaded middle seat. But hey, this was, by all appearances, a young couple and the flight was full. They wanted to sit together, right? And they probably wanted to sleep too, right?

Oh, so wrong. So very, very wrong. They were anything but sleepy.

Now don’t get me wrong, I generally enjoy meeting and engaging with people on flights. It’s a fun, speed relationship and I find that people often reveal amazing things about themselves during this brief and temporary bonding time. I swear I’m the bartender of the skies. But at dark:30, no one really wants to forge a temporary relationship. No one, but my row-mates, that is.

Judging by my quick sideways assessments, I guessed the young man next to me to be about 21 and the young lady by the window to be about 18 or so. He was lanky and clean-cut, she was a bit goth in appearance with dyed hair, dark clothing, black nail polish, and heavy black eyeliner – not over the top, but definitely on the moody side.

I initially thought they were boyfriend/girlfriend. And then I stopped thinking about them, closing my eyes in the universal flight language for “I’m not interested in interacting.”

Oh but wait. There was an announcement about a sweatshirt found at the gate. The young couple next to me stirred in excitement. It belonged to her and she was about to vault over me to get to the flight attendant holding it aloft in the aisle.

“They said to just push the call button,” I explained, “They’ll bring it to you.”

After showing them the location of said call button, my first “uh-oh” moment, the sweatshirt was delivered and we settled back in.

“This is only our second time to fly.”

Huh? Oh…he was talking to me.

My determined row-mates apparently did not speak airplane-ese.

He: “Have you flown more than twice?”

He: “Where have you flown?”

So I rattled off a few of the more interesting places on my travel list, and settled back in to obvious nap mode once again.

Shoot. In hindsight, I should not have shared the more interesting places on my travel list. I should have said Detroit and Burbank. I politely gave some details so we could return to sweet, sweet silence.

He: “Are you getting off the plane in Denver?”

No, I explained. I was traveling to Las Vegas. I learned that he and his girlfriend(?) would be getting off in Denver. I clung to that promise.

The question and answer session continued…where do you live…I learned where they lived. Why are you going to Vegas…I learned why they were going to Denver. I learned again that it was only their second flight.

My brain was fighting consciousness; fighting to not become engaged.

Then it happened. He asked THE question. He found my kryptonite.

He: Do you have any animals?

So yeah, I have animals and I can’t NOT talk about them. It’s physically impossible. Let the airplane relationship begin and get ready to see photos of my very cute animals.

My new, temporary, too-early-in-the-morning best friends were Zach and Heather (I might have made these names up. It’s not to protect the innocent, it’s that I don’t remember names easily with a wide-awake, first-dose-of-caffeine-on-board brain, so a dark:30 brain doesn’t have a prayer).

I was asked to guess their ages. I said I had no idea but tossed out my 21/18 estimate. I learned that he was 16 and she was 12. So much for any subconscious dreams of joining a carnival as the “guess your weight/age” person.

Wait, thought sleepy brain. TWELVE? Who lets their 12-year-old wear make-up like that? Did you put that on in the airport bathroom after your mom left you at the terminal? And please tell me you are brother and sister, not underage boyfriend running off with way underage girlfriend.

Zach was in ROTC in high school. Heather liked music and staring at her tablet and/or phone. Zach was excited about climbing a mountain. Heather did not like to be outside. They lived with their mom and stepdad and two step-siblings.

The family had two chihuahuas, a dachshund, and a Rottweiler, but Zach really wanted a dog that was his own dog.

Zach worked at the Taco Bell. His father and grandmother had worked there once as well. Heather liked to make (and wear!) lots of bracelets. She did not yet have a job because 18-year-old-in-appearance Heather was really only 12.

And somehow, through all of this back and forth, I became their surrogate mom.

They: “Do the drinks cost anything? What do they have? Can you ask for us? Can I have two drinks? Will they charge for the extra drink? What should I do with my gum? How much longer do we have before we get there? Can you hold my sweatshirt? How high do you think we’re flying right now? Can I have your peanuts? Can we get more peanuts? Can I get another drink? Will you ask for me?” 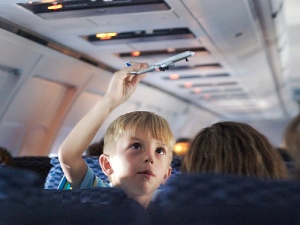 I took care of my adopted kids and exchanged weary, knowing glances with the frazzled dad across the isle who was trying to wrangle two wide-awake young boys. This was a first for me. Having never had kids of my own, until Zach and Heather, I was never inducted into the Paternal Order of Bone-Tired Moms and Dads.

But now I had a little taste. A tiny little 105 minute taste.

We landed in Denver and I helped my kids gather their belongings, I told them to check the seat-back pockets, I asked if they knew where to meet their uncle.

While I stayed put for the next leg to Las Vegas, I sent “my” kids on their way with well wishes, while playfully admonishing Heather to turn off her phone and enjoy her hike up the mountain. Oh yeah, I was in mom mode, though I did stop short of telling Heather to immediately wash that crap off her pretty face.

As it turns out, when I set my dreams of a nap-time flight free, I actually enjoyed my gregarious temporary kids. They don’t live too far away from me, and sometime in the near future I may wander into the Taco Bell where Zack works to see if I can say hello.

Or maybe not. That might be a tad stalkerish. In the real world, he is not really my kid at all.

Not having kids was not so much a conscious choice on my part as much as it was a never-got-around-to-it thing. During my married years, well, it just wasn’t something that interested us. Had I met Jim during my childbearing years, I suspect we might have decided to have a kid or two, but who knows. When I had anything that resembled a nesting instinct, I got a puppy.

I have honestly rarely, if ever, regretted my decision to remain childless.

I am an aunt and a GRRRRREAT aunt (I do require you say that in Tony the Tiger style) now that my nieces and nephews are starting families. I have wonderful, beautiful kids in my world. I do not have to pay for their college education, I do get to enjoy them and spoil them. Eventually, I think they’ll be willing to look in on me now and then when I grow old.

Have I missed out on a huge life experience? Obviously, yes, but I have had other experiences that mommies and daddies don’t get to have. We all walk our own path.

One thing I do know, if I did have kids of my own – the permanent kind, not the flight-to-Denver-kind – my son would absolutely have a puppy, or three, of his very own and my 12-year-old daughter would not be allowed to wear heavy black eyeliner, but I would cave to allow a bit of light lip gloss and maybe a touch of mascara from time to time.

Hope you had a great trip, Zach and Heather. I hope you climbed the heck out of that mountain. I hope your temporary mom or dad on the return flight learn a lot from you too. You probably won’t remember our 105 minute relationship, but I sure will.