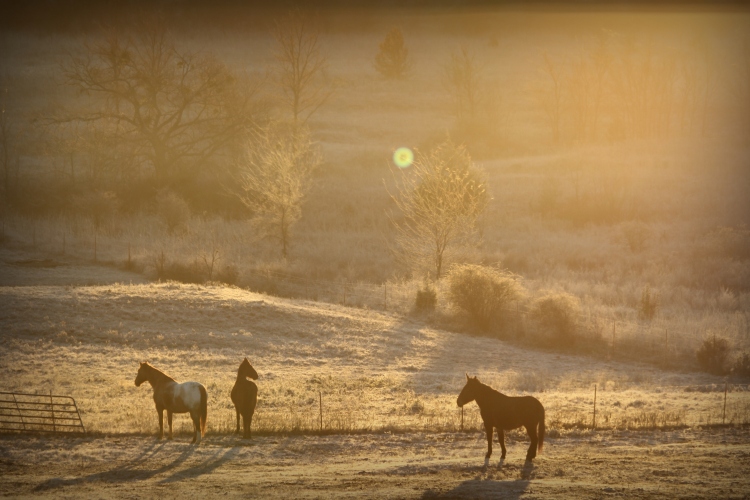 I woke up this morning just as I do every day, though admittedly a good deal later than normal. Yes, I slept in. It was nice. It felt lazy and indulgent. I can’t believe all of our dogs allowed it, but God love them, they snuggled in and enjoyed it right alongside me.

Things outside the window looked familiar in the early morning brilliance. The pond had a thin little layer of ice tiptoeing tentatively from one shore toward the other. The frosty dew highlighted the trees better than any strand of Christmas lights ever could. I could see a few of our horses milling around in the pasture behind the house, likely wondering when one of the humans was going to emerge to toss a little hay their way.

I could smell Jim’s first cup of coffee, or maybe his second. I did sleep pretty darn late. I could hear some of the dogs tap dancing up the stairs to join him in our loft office, where a morning newscast played on the television in the background. Jim is always an early bird so these smells and sounds are familiar and comfortable.

Yes, it was by all appearances just another day on the farm. Or was it? Well, I guess that’s up to me.

It really wan’t just any other morning. Last night, in a fit of laughter and good fun with good friends, we said goodbye to a five and welcomed a six. 2016. Twenty-sixteen. Sounds big. Sounds like it could come with change…or should come with change. Sounds promising?

I have to admit that I have never been great with change. I was the kid who cried on the first day of school. I was the preteen who was shocked when her girlfriends threw away the comfort of knee socks in exchange for shaved legs in pantyhose. I was the tomboy who would have been content to just drape myself across my horse’s back to nap in the shade forever and always.

But those things had to change. I had to grow up. Through all of my Happy New Years I’ve embraced a lot of really good change. I’ve also had to suck it up through some rough change. It’s that thing called life. We all do it. Some of us do it better than others.

I saw a lot of people I care about go through change  in 2015. It seemed like a year for it. Some of it was amazing – seeing my niece and her husband welcome new baby Grace comes to mind. Some of it was hard – and by hard I mean major life altering stuff. I honestly witnessed a couple of friends have the proverbial everything-I-hold-near-and-dear rug ripped right out from under them.

One friend in particular comes to mind, and I think she will know I’m referring to her when she reads this. She truly had a hell of a year. The triple whammy runaway freight train kind of change that can easily take the strongest of people straight to their knees. You wonder how a person ever stands up again after a year like that.

For all of the times I have had to face change, I hope I have displayed even one tenth of her character. I think she is ready to put the trials and lessons of 2015 to good use in building a shiny new 2016. I’m right there with her.

So here we are. Facing another new year. By virtue of a calendar, basically some numbers on a chart, we give this day such great meaning.

I won’t sit here and tell you that I’m going to make a list of New Year’s resolutions. I did manage to stick with a few of those cliche bullet points I scribbled down this time last year. I did actually mail a few Christmas cards this year (if you didn’t get one, it could well still be on the way…I said I mailed them. I didn’t say I mailed them on time.). And I did complete a half marathon (don’t get excited, a friend and I walked it, but we walked really fast). Oh, and I only locked my keys in the car one dang time, but that was great progress over the previous year. Points for effort?

This year, my resolution is to NOT tie myself down to an annual ritual so many execute and so few achieve. But I am entering the new year with some new ideas. Yes, the word idea sounds SO much friendlier than rez-OH-loo-shun.

I’m going to focus on being a true and good friend, sister, and aunt. I have amazing people in my world and I need to always be sure to nurture and honor these relationships with the same care and dedicated attention my dad gave to his beloved, prize vegetable garden. (This may or may not mean I will actually spray water at my friends and family. They’re cool people. They’ll think it’s funny too.)

I’m not going to try to define exactly what these ideas mean. I’m going to let them evolve and I’ll evolve with them. I’ll invent the meaning as I go along. But I will work to keep these ideas top-of-mind every single day.

And I’m going to focus on me. I’m going to believe wholeheartedly in myself. Maybe 2016 is the year Nancy finally realizes what and who she truly wants to be when she grows up. I have a pretty good idea. I learned a lot about me in 2015, and what I learned is that I may be ready for some change. Some good, old fashioned change for the better-for-me. It won’t be anything radical…you might not even notice the change. But I will.

Truth be told, I’m at an age where change happens whether I like it or not. My body has changed, my mind has changed (oh so many times), people around me have changed. And boy has my world changed from where I was during this calendar flip 10…20…30 years ago.

Despite the number of calendars behind me, there is so much great possibility still ahead. Some of it requires leaving old ideas behind, some of it requires dusting off ideas long buried. I believe my mind can follow my heart into some great new chapters.

And I think a little well-nurtured change will be a great thing. I just have to tell first-grade Nancy, who stood sobbing as her mother turned to leave her at school on the first day, that everything truly will be OK. Because darn it, “…you is kind, you is smart, you is important.”  (Oh hey, I may have just realized the answer to the “what is your favorite movie” question that I can NEVER seem to answer. The Help. Such a good one.)

So today, resolutions be damned, I’m coming up with ideas. Brand new ideas and old ideas that need a little TLC. I’m staring possibility in the eye and believing that I’m in for one great year.

After all, it’s either just the act of taking down one calendar to put up another, or it’s the first sunrise of a beautiful new adventure. It’s up to each of us to decide. I know which direction I’m heading.

Hope to see you there. 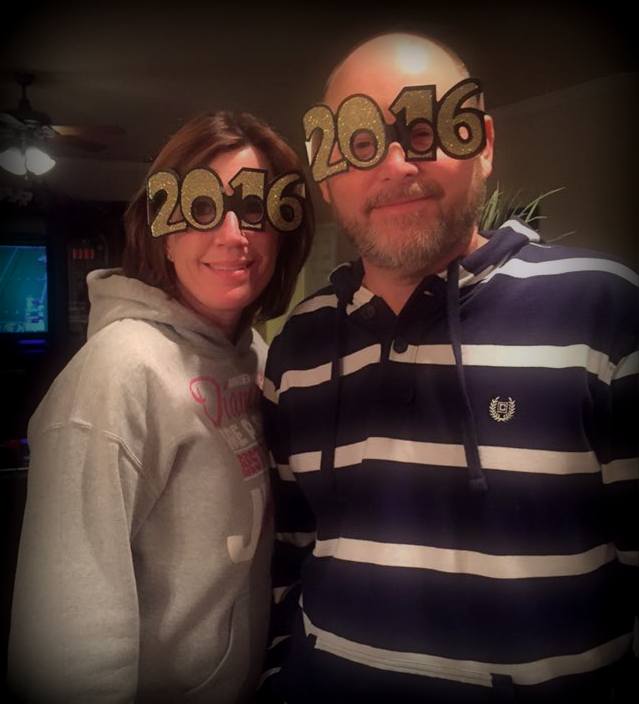