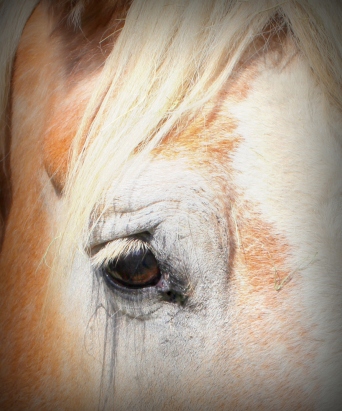 I first saw him from across a large paddock. He was relaxing under the shade of a tree on a glorious, sunny fall day.

I’ve been waiting for this hello for four weeks and though I wanted to rush across the grassy space to throw my arms around his neck, I knew better. Just as I know not to approach a stray dog head-on, I also know not to rush straight toward a horse that I don’t know, and that doesn’t know me.

So I approached quietly, talking softly so as not to startle him from his afternoon nap. He turned his head to study me and his sleepy eyes immediately creased with worry.

While I certainly posed no threat to this handsome horse that I have named Big Paul, he had no way of knowing that. His life over the past few months, or maybe years, had really given him no reason to look at an unfamiliar human with anything but mistrust.

Most of this big horse’s past life is and will remain a mystery to me. What I know for sure is that he was sold at an auction somewhere in the United States and then shipped to a feedlot in Oklahoma to await another grueling trailer ride to a Mexican slaughterhouse.

Until his recent life at Silvermoon TLC boarding farm, new people approaching had likely been valid cause for stress to Paul. Horses are not handled gently at auctions and certainly not coddled at the killer buyer feedlots. They are a commodity in both places, nothing more. They are moved around quickly using a horse’s natural flight instinct  as they are  herded from pen to pen, into chutes, and onto stock trailers. Horses are spooked, stressed, jostled and often injured.

It’s no wonder the approach of yet another stranger cause worry to cloud Big Paul’s huge brown eyes.

Sensitive to his concern, I approached with my shoulders rounded and angled away from Paul, my arms relaxed at my sides. I kept my eyes cast down, just glancing sideways at my horse. I spoke very softly to him, calling to him using the nickname he recently earned while I was pouring over photos of him that had been shared with me online.

He tipped an expectant ear my way, but as I reached sideways to run a hand along his neck, he still took a few nervous steps away, unsure of my intent. I stepped sideways with him and simply reached up and gave a spot just below the crest of his neck a light scratching. That stopped him in his tracks. No predator in the world knows to scratch this spot so perfectly. I must be ok.

And so we stood together in the cool shade for several minutes, side by side, me telling him how glad I was to meet him as I continued to run my hand along his golden neck. As he relaxed, I turned to face him, using both hands now to reassure him that I was truly one of his best friends in the world.

Then I reached into my pocket, extracted a few little pieces of carrot and offered one to Paul. This gesture would cause the horses, donkeys, and mule that share Tails You Win Farm with me to crowd around and get a tad pushy as they competed to be the first to nab a sweet, crunchy treat.

Paul, on the other hand, sniffed the carrot carefully and turned away. Ohhhhh…a horse who has never had a carrot. Well, Big Paul, I have much to teach you.

After a few minutes, I stopped petting Paul and walked back out of the paddock to retrieve my camera for a little photo shoot. Paul, now relaxed, followed me out of the shade to bask in a little sunshine as he munched on a bit of hay from the giant round bale in his paddock. As he enjoyed his afternoon snack, I had an opportunity to get a good look at my new friend.

I estimated him to be around 17 hands tall, meaning his withers were about as tall as the top of my head, at 5’9″ (one “hand” equals four inches). His coat, a lovely golden shade, was still shedding old, dry hair, a new glossier coat coming in beneath. His tail brushed his hocks with burrs tangled throughout. I was itching to take a comb to those pesky snarls, but that would have been rushing our relationship. We have time.

His pale mane also had a few big burrs in it, I was able to tease those free. His mane was thick, but worn completely off where the collar of a harness would rest – a little clue to his past. We feel sure Big Paul was used as a working farm horse or a carriage horse for most of his life. The general consensus is that Big Paul may have been an Amish work horse, possibly traveling to Oklahoma from as far away as Pennsylvania.

His long face, graying a bit  around his eyes, had a handsome white blaze marred by twin scars on his nose, likely from a halter fitted too tightly, or worn too long. His eyelashes, impossibly long and thick, shaded his eyes as he continued his seemingly shy glances my way.

Big Paul’s hooves, though in need of attention from a farrier, appeared sound. His long legs were straight, and strong with no lameness. One back leg had an impressive scar on the inside of the hock. It would have been an impressive cut, and perhaps the reason Paul was retired from work and sold, though his gait did not reveal any permanent limp or damage from the injury.

I actually believe that Paul’s life was likely upended simply because of his age. The veterinarian estimated him to be around 16 year old. Not ancient by any stretch, but perhaps beyond his peak heavy work years. I’ve been told that the Amish will sell off horses of a certain age in favor of younger horses. I need to do a little research on that, though the whys don’t really matter beyond satisfying my own curiosity. 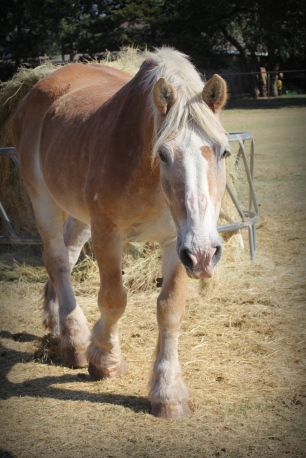 The reality is that I don’t care how old Paul really is. I don’t care that he can’t do hard work any longer. I wouldn’t care if he happened to be lame, though I’m quite relieved that, beyond needing to gain a few pounds, he does appear to be very healthy.

All that matters to me is his sweet disposition, his gentle, relaxed nature, and, hopefully, his willingness to accept one more change – the move to Tails You Win Farm.

As I spent time getting to know my “online boyfriend” – we did meet on what could be considered an online dating service for horse-crazy people seeking horses in need of a lasting relationship – I just kept my heart in tune with his. Horses can speak volumes to you if you just leave your own assumptions behind to spend some quiet time petting, brushing, and just being there with them.

What Paul told me was that he is very weary. That he has known great stress. That he has never been considered a companion animal, but instead a tool to be used until it is worn out. He told me that he is willing to try again, that his spirit is still quite strong.

I think this relationship is going to work out very well. While there was no immediate ah-ha moment when we met – we did not rush to each other in cosmic recognition – I could see Paul lowering his guard, growing to trust me, and eyeing me with curiosity instead of fear.

I think that’s a perfect start. I think we’ll become fast friends. I think all of Big Paul’s worries are behind him now.

And I think I’ll teach him that carrots are quite delicious.

5 thoughts on “He Doesn’t Know What Carrots Are.”