Nadia when she first came to the farm as a youngster.

Nadia and I both need a little attitude adjustment.

Nadia is my foster dog. She is going through a rough patch. The happy, easy-going puppy I once knew has become a bit of a moody, uncomfortable teenager. She seems lacking in confidence. Her social skills are unpredictable. She often seems stressed or concerned for no apparent reason.

I really can’t explain why Nadia has decided to become a Goth dog. Yes, she was rescued from life on the road at a young age, but that was eons ago in dog time. Her life truly has been safe and secure from that point forward. We will not fall back on the “she’s a rescue” excuse.

No, Nadia’s issue are not because I rescued her. During her first couple of months at our farm, the onetime stray transformed into a happy, bouncy, outgoing puppy with no lingering issues from her roots as a castaway.

Nadia did place in a home for a period of time. It was a good home with a woman who really tried to help Nadia fit into her world. But it didn’t work out. You can read that tale here for a little background.

Nothing tragic happened in her “almost home.” She received good care, loving attention, and positive training. But somewhere along the way, Nadia seemed to stop trusting her new life.

So now, of course, she has been welcomed back into our home. The plan was to give her a bit of time and training to restore her to her more carefree self, then try, try again to find her a perfect permanent home. This time we would take a few cues from things we learned about Nadia during her time in my friend’s home when she started exhibiting stress and anxiety issues. For example, we now know that Nadia will do better in a home with another resident dog. Nadia will also likely do better in a suburban or country setting instead of a home in a midtown neighborhood. 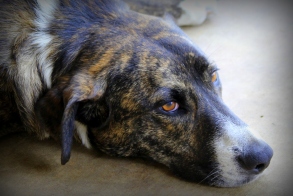 It has been several months since Nadia returned to Tails You Win Farm. She loves being here with all of the other dogs. She loves having dog door access to the big fenced yard. She loves lounging on the multitude of dog beds here.

And yet, something is still so off. I still get a very heavy feeling when I’m with her.

This week I decided that we need a change. It may seem simple, it may seem silly, but I think I have finally discovered the ticket to a happier, lighter outlook – for both of us.

I’m going to change her name.

Yes, I am a professional dog trainer and I think this dog needs a new name. Oh that voodoo that we do. Sometimes effective dog training has nothing at all to do with yummy treats and the right leash or collar. Sometimes it’s just a gut feeling backed by some good old dog sense.

Initially, I dubbed this girl Nadia because she loved to tumble all over the yard in a floor exercise routine that would have surely earned a perfect 10. She had dark, lovely hair, and big dark eyes, so making her the namesake of a talented Romanian gymnast seemed very fitting.

But think about it. What image do you see when you think of the name Nadia?

Well, I remember Nadia Comaneci’s debut in the Olympic games very well. She came across as a quiet, serious, focused young lady – anything but lighthearted and playful.

So now I am changing Nadia’s name to Mary Lou. Yes, Mary Lou. I’ve tried the name out and it causes a certain dark-haired dog to wag the back end of her body from side to side as if there is a giant hinge just behind her rib cage. 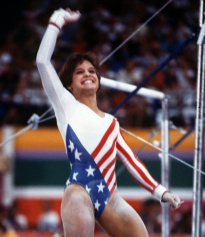 And if you look back again in Olympic history, well, there’s no denying that Mary Lou Retton had incredible energy and appeal.

Will the name change really matter to Nadia/Mary Lou? Well, maybe not directly, but it might change my attitude toward her; it might improve my feelings surrounding her. And if I change my mindset, her outlook may change as well.

A human’s attitude toward a dog has a huge effect on that dog and his or her ability to respond to training and environment. Nadia/Mary Lou’s situation brings to mind the plight of a friend who was training with her dog in obedience and trying to earn a novice title in American Kennel Club competition.

The dog trained nicely and performed very well in all of the exercises in the trials until it came time for the group stay…which after a few fails became known as the “dreaded group stay.”

In this particular exercise, several handler/dog teams enter the ring together and line up with dogs sitting to the left of their humans. The judge instructs the handlers to leave their dogs, and everyone utters a loud “STAY,” leaving their dogs lined up in sit/stays as they walk to the opposite side of the ring for what generally feels like the longest minute of their lives.

My friend’s dog would hold steady for 20, 30, even 45 seconds, but you could easily see increasing anxiety furrowing her brow and causing her to pin her ears back. Before the full 60 seconds could pass, she would slowly get up and slink to sit directly in front of her human.

So my friend asked me to watch her with her dog to see if I could come up with some trick she had not yet tried. Was there some correction or some incentive that she had yet to think of?

After watching her in a trial, and witnessing another failed stay after an otherwise great performance, we met at our training club. I had an idea.

“Ok, here’s what I want you to do,” I instructed. “As you are walking away from your dog, I want you to take three deep breaths. Then, when you turn to face her from across the ring, I want you to plaster a big, happy smile on your face.”

She looked at me like I was completely nuts, but desperation in dog training often makes insanity look pretty damn good, so she followed my advice. Guess what? Yep, the dog stayed put.

The issue was not with the dog at all. The issue was with the stress my friend felt about being away from her dog on the stay exercise. Prior to our little training session, the expression on her face as she planted herself opposite her dog was a big, stern scowl born of obvious stress and fear of failure. Her dog was completely unnerved by her normally cheerful human’s dark expression and it caused her to lose her confidence.

A few huge smiles later, and handler and dog were awarded the degree of Companion Dog, AKC’s novice obedience title.

So, am I guilty of the same story, different chapter? Maybe so. Maybe I’m just mired in the frustration of dealing with a dog who needs to work through some growing pains. Perhaps I’m still projecting disappointment that her placement didn’t work out. Maybe the stress we seem to feel just requires one little change to fix my attitude. Could it be that the problem is not the dog at all?

Oh yes, yes it could be.

A Nadia by another name, just might find the world a little brighter. A Nadia by any other name just might be a Mary Lou. Sometimes the most profound dog training isn’t really profound at all. Sometimes it just requires looking at a problem from a different angle.

Come on, Mary Lou. Let’s give it a try. A little placebo name change sure can’t hurt, can it?

I, for one, feel better already.