It was just a chance encounter that lasted no more than a few moments. We were watching people feed hundreds of pigeons near the entrance to the Batu Caves Temple in Malaysia when a small puppy trotted into the scene.

Just as Moses parted the Red Sea, this puppy had the same effect…not on the pigeons, on the people. You’d think she was a 100 pound rabid Rottweiler instead of a 10 pound pup the way people jumped out of her way and kids ran screaming. Yes, literally screaming.

Jim and I must have looked like a happy port in a storm of very jumpy humans. Little Batu, as I immediately named her, came right over to us. She had a sweet expression on her face, her tail was wagging gently, and she was giving all of the soft body language that I love to see in a young puppy. Jim and I were, of course, immediately smitten.

She couldn’t have been more than 10 or 12 weeks old. Her coat was a bit rough and dirty, her toenails long. She was not thin. My guess is that she hasn’t been away from her mother’s nourishing care for very long.

I kept looking around thinking that someone would quickly come after the puppy. “Sorry! She got away from me.” “Oh goodness…there she is! I was so worried.” “Oh thank you for catching her! Come here silly girl, how did you get so dirty?”

But that didn’t happen.

Batu was the first and only dog, beyond working dogs searching luggage at the airports, that we saw on our vacation to Kuala Lumpur (KL) and Langkawi, Malaysia, and Dubai and Abu Dhabi, United Arab Emirates. This really should not be a surprise as Islam is the dominant religion in both areas, but my stubborn, dog-infused brain still had a hard time embracing the idea of a non-dog-loving culture.

In my world, I am surrounded by people who love animals, and dogs in particular. Jim and I have lots of dogs. Our personal dogs, our foster dogs, they all combine to make our lives richer, hairier, and a bit crowded in the feeling-smaller-by-the-day king size bed we share with too many of them.

It was a culture shock to step into a world where no one was walking their dog; where no children were running and playing with a family pet. Jim’s brother, Jeremy, told us that many expatriate families brought dogs with them to KL, and some residents of KL had dogs, but I sure didn’t see any. Only Batu.

It’s a confusing topic because even information searched on the Internet relating to dogs and Islam is a bit contradictory.  Traditionally speaking, the Islamic religion states that dogs are impure and several injunctions have been created to warn Muslims against most contact with dogs.

So on one hand, while it is not haram (an Arabic word meaning sinful, an act forbidden by Allah) to own a dog, it is not permissible to keep a dog in the house because dogs are not considered hygienic.

And while it is not haram to touch a dog (though apparently many Muslims won’t), if the saliva, snout, or mouth of the dog touches any part of your body or clothing, then you are required to wash yourself and your clothes in a specific, ritualistic manner.

At the same time, Islam very clearly states, and I’m paraphrasing here, that all animals have been created by Allah and that it is the duty of Muslims to protect and provide for the well-being of animals as an expression of thanks to Allah. From everything I read, this injunction requiring compassion and care for animals has a loose and disparate interpretation.

I’m just barely scuffing the surface of the topic here. I have to admit it’s all a real head-scratcher for me, and I’m apparently not alone in that feeling. From articles I’ve read on the Muslim view of dogs, interpretation varies greatly from region to region, and country to country. Some Muslims feel they can’t even touch a dog, some Muslims own dogs as pets.

I think the dispute over dogs in Malaysia, where the majority of the population is Muslim despite a growing multicultural influence, was really brought home for me by an article written for the New York Times by Thomas Fuller last fall. It detailed an event organized by Syed Azmi Alhabshi, a pharmacist in Kuala Lumpur.

The event was called “I Want to Touch a Dog” and was created as a get-together for dog lovers and traditional “canine-averse” Muslims.

Prior to the event, Syed Azmi advised state religious authorities of his plans and made sure an Islamic scholar was on hand to show Muslims how to conduct the ritualistic washing following contact with the friendly pooches in attendance.

According to the article (read it here) Syed Azmi, who is Muslim himself, thought he had his bases covered. He thought he was hosting a simple, positive event to promote a better understanding of dogs in his community.

The event went well. Photos of Muslim women in head scarves hugging dogs appeared on the event’s Facebook page. And then all of the good intentions backfired. Syed Azmi started receiving messages…thousands of messages, many rather unpleasant. In fact, some of the messages were apparently quite threatening. It would appear that despite all of the planning and precautions, Malaysia’s Muslim leadership denounced the event.

What a confusing world little Batu lives in. And yet she is still nothing more than a sweet, innocent little stray puppy happily approaching people, then confused and frightened when they recoil from her. But she seemed ever hopeful. I will always remember the sight of her trotting away from us to follow a man walking down the street, her little tail wagging away as if to say, “Maybe this will be my human.” That’s the last time I saw sweet baby Batu.

When I have the opportunity to travel to foreign countries, in addition to sightseeing, a huge part of the adventure for me is learning about other lifestyles.  It’s not about agreeing with everything I see and learn, it’s about developing a level of understanding. It’s about knowledge and respect.

And this trip was a doozy on that front. There are so many things I don’t understand about Islam and the Muslim culture. I got to observe a lot firsthand. I saw the variety of traditional clothing worn. I visited shrines, temples, and mosques. I learned about traditions and 1400-year-old beliefs. I observed Muslim families together. I saw Muslim teenagers enjoying a day on the beach. And I saw Muslim people reacting to a tiny, harmless puppy.

I came home with more questions about Islam and Muslim culture than answers, but I’m slowly filling in some of the blanks. I also now know there are dog rescue groups in KL and throughout Malaysia. Not to the extent that you find them in the United States, but they exist and they do good work. I did send them each a message about Batu with a photo attached with the hope that somehow, that cute little tan and white needle might be found in the vast haystack north of KL.

I know it’s not likely. 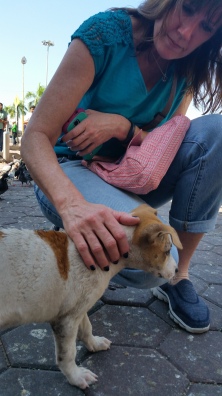 Had she still been there when Jim and I emerged from our tour of the Batu Caves, I can’t really tell you what I would have done, but I have a feeling I would have done something. Or maybe there was nothing to be done.  We were guests in an apartment complex that did not allow pets. Seeing her again and not being able to whisk her away to a safe and better life would have gone against everything that I believe and practice in my life in good old Mounds, Oklahoma.

According to the Nancy and Jim philosophy, it is a sin to NOT take care of a little stray puppy. Now I know what you may be thinking…there are plenty of stray dogs right here at home that need our help. I guess the difference is that at least here, a stray dog has a fairly good chance of running across someone that will offer assistance. For Batu in KL, well, her chances for finding a good life seem almost nonexistent. I sure hope I’m wrong about that.

I wish I could have given Batu a happily ever after. I wish her story ended with a long flight back to the United States where she would be free to plant a kiss on my nose and curl up on my pillow.  All I can do now is try to believe that the puppy who doesn’t know her name is Batu has charmed her way into the heart of someone in KL. Someone who will look into those bright eyes and fall in love just as we did. Someone who will take responsibility for her welfare.

Stay hopeful, Batu. I’m pulling for you from half a world away.