Who’s afraid? Well, not our 3.5 month old foster puppy, Piper. She’s not afraid. In fact, she just took the dinosaur toy away from him. 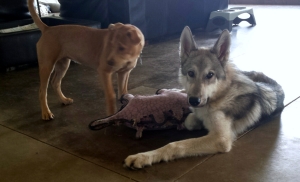 And Snowflake, our husky/malamute mix, is definitely not afraid. In fact, she thinks she may have found her brotha from another motha.

In fact, none of the dogs in our house are afraid of the big (actually not-so-big), bad (not bad at all) wolf. And frankly neither am I.  Jim certainly isn’t.

The wolfdog in question came to us via a friend, the fabulous CC, whose neighbors found this extremely malnourished “husky mix” in their yard. They took the dog in, gave him food and water, and then worked

on the what-next part of the story.

Because we tend to foster and rehome a lot of foundlings, CC called on Jim, our wonderful veterinarian/friend, Lauren, and yours truly to see if we could help. Well, of course. And then the photo attached to the plea showed what didn’t appear to be just a husky mix. Ah, the plot thickens and Jims eyes sparkled with excitement.

Jim has always had a fondness for Nordic dog breeds and, in addition to our girl Snowflake, has owned huskies and malamutes in the past—you know, the closest canine link to their wild cousins. Wolves have also been a longtime fascination of his. He even has a tattoo of one and another is being planned. He did not hesitate at the chance to help out a potential wolf cross dog.

In my rescue work, I have actually rescued five wolfdogs from our city animal shelter in years past. They are not legal within the Tulsa city limits, so unless someone can get them out and into an appropriate place, they are destined to meet the big spirit in the sky. I am very grateful that I was allowed to help the wolfdogs “way back then” in the 1990s, and equally grateful that we now have a shelter manager who works to get any suspected wolfdogs to approved rescue groups. 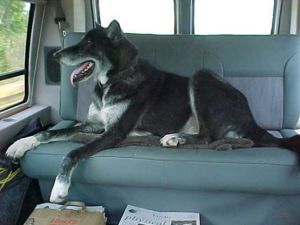 This is my first wolfdog rescue, Wolfman Jack. He was a huge, wonderful boy.

While I did not actually foster any of my past wolfdog friends in my own home, I spent a lot of time with them as I worked to find them responsible homes. It was quite the learning experience, both from the standpoint of being around a dog that is not quite a dog, and a wolf that is not quite a wolf, as well as being on the receiving end of people’s reactions to these beautiful animals.

Wolfdogs seem to have quite a lot of stereotypes applied to them. People seem to be terrified by them and drawn to them in equal parts. There is something undeniably alluring about the slightly left of domestic look you see when you look into the eyes of a dog that is part wolf. Sadly, most human perception seems to be misperception, perhaps due to years of children’s stories that featured scary versions of Mr. Canis Lupus.

I mean we’re talking WOLF here—you know, the villainous wolf.  Just ask Little Red Riding Hood whose trip to grandma’s house was so rudely interrupted, or those three pigs who discovered the importance of brick and mortar construction.

And let us not forget that boy who lied wolf, and lied wolf, and then, when he finally really cried wolf, well, no one believed him and he became a wolfie hors d’oeuvre. Yes, wolves have been portrayed as the bad guys.  No doubt about it. Even in the movies the vampires always seem to be sexier than the werewolves.

But then people…and probably a few frisky dogs…got the idea to cross wolves with domestic dogs. After all, all doggie roots trace back to wolves, right? Yes, even a snorting, smash-faced bulldog has some wolf genes hiding in there. Crossing dogs with wolves is just a way of refreshing the old family tree…going back to the original roots. Right? It’s not a bad thing. Or is it?

I will tell you that even pit bulls (and don’t get the wrong idea…love them…live with a couple of pit mixes) don’t seem to raise emotions like the appearance of a wolf-dog on the scene. Everyone has an opinion about them—especially people who have never actually met one. Rumors and myths abound. Everyone is ready and willing to share their opinions about them. Even with my limited wolfdog experience, I’m probably just as guilty as the next guy.

So I decided to get the facts. If I’m going to have a wolfdog as a house guest (and it’s not hypothetical…he’s here), I need to understand the real facts about them. I’m fortunate that I have been introduced to Karen of Freedom Song Wolf Rescue, a non-profit group dedicated to the welfare of wolves and wolf mixes.

My first lesson, as I have demonstrated thus far in this story, was to correct my terminology. I, along with a majority of the world, have always referred to these dogs as wolf hybrids. This is technically not correct. According to Karen (and hey, good old Merriam-Webster agrees), the term hybrid refers to the breeding of two different species of animal, usually resulting in sterile offspring. The tiger and lion cross, is a good example. The resulting ligers cannot reproduce.

Wolves and dogs, on the other hand, are both in that canis lupus family. They can mate successfully and their offspring can reproduce. So the preferred term for the resulting cross is wolfdog. There. I feel smarter already.

But what about this reputation? Even when I simply posted some photos of this boy on Facebook I got a huge range of reactions; everything from “how beautiful” to something about our potential to lose our faces in the night.

Well, concern duly noted, but I rarely bring in any animal that I feel might really remove my nose or other parts I deem important to my overall anatomy. But that said, it would be irresponsible of me to not understand the implications of having a wolfdog in the house for a sleepover.

Back to Karen.  I asked her what she felt was the greatest misconception about wolfdogs. Her immediate response went straight to that reputation we just talked about. People do tend to believe that wolves and wolfdogs are mean and unpredictable.

According to Karen, as well as to my own limited experience and even information on good old Wikipedia, this assessment is simply not accurate. In fact, wolfdogs tend to be more shy and reserved, choosing to flee rather than attack. The countless people who have obtained these crosses thinking they have procured the ultimate watch dog are likely sorely disappointed.

So then I asked the really loaded question…the one that I knew would be pretty impossible to respond to with a definitive answer: Do wolfdogs make good pets?

Though we were chatting online, I could almost hear Karen’s heavy sigh come through my wifi. She agreed that no, there was not a simple answer to that question.

Karen shares her home with two wolfdogs and, as I’m finding, describes them as amazing creatures. She admits that some are extreme containment challenges, just as huskies and malamutes can prove to be. She has definite recommendations when it comes to fencing materials for anyone planning to keep a wolfdog, ”keep” being the important word here. They can have strong a strong prey drive that your house cat or the neighbor’s chickens may not appreciate, so you have to be ready to provide safe and adequate containment for a wolfdog and no, that does not mean a small pen or a chain. No animal deserves that life.

She also stresses that it is important to understand wolfdogs and the fact that personalities can vary greatly depending on the percentage of wolf vs dog in the mix. Living with one is not like adding a new Labrador retriever to the house. Karen suggests that they should be viewed as companions rather than pets…something I actually insist upon for all of my animals. I actually avoid using the word “pet” because I think it demeans the importance of animals in our world. They are living, breathing companions…if allowed to be. So I’m with you on that one for sure, Karen.

She also firmly states that training methods should be positive, not forceful. The old dominance, show-em-who-is-boss theory just isn’t fair and won’t work with a wolfdog. Well, Karen, I agree 1000% and feel that should always be the rule with dogs too. Why so many people are hung up on correction training and punishment instead of TEACHING and rewarding desired behavior is beyond me. Wolfdogs are not the violent ones, people often are. Oh, but that’s a soapbox for a different day, a different post.

Karen says she cannot imagine her life without her wolfdogs, but also says she and her husband have adapted their lifestyle and home to accommodate them. She believes that people looking in from the outside might think they are crazy for how they live. Yeah…she said that to me. The crazy dog lady. Now THAT is funny.

The two humans at Tales You Win Farm are all about adapting. We are professional adapters. Adaptable-R-Us.

So right now the things I have learned in my limited experience with THIS wolfdog are:

I’m not sure how long our wolfdog guest will be with us. We would like to help him get strong and healthy and that may be a bit of a long road for our bony new friend. He is in need of some serious groceries, care from our most excellent veterinarians, some good rest, and a lot of TLC. If we can continue to provide the responsible care and environment he needs, we are excited to do that. It’s an amazing experience.

I know this newfound friendship is a lifelong dream come true for Jim, and truth be told, for me as well. There is something special about an animal that is so in touch with his ancient roots, but who is, at the same time, a silly, playful, belly-rub-loving kid.

This journey has just started and no matter where it leads, the path followed will be the one that is in the best interest of this wolfdog. As with any animal, it is important to look at every angle, every pro and con to determine if you can provide what that animal needs to enjoy not only a safe and healthy life, but a fulfilling life as well. Dogs, wolfdogs, cats, horses, donkeys, etc., deserve the best quality of mental as well as physical well-being possible. It is pure human selfishness to look at it any other way. (A nod to my friend Lisa who went selflessly down this path when deciding whether or not to adopt a new German shepherd puppy.)

We will work closely with the experts from Freedom Song Wolf Rescue to insure that this wolfdog’s life is never hard again. Whether he is with us, or the rescue group, or an eventual adoptive home, this guy’s only worry now is what his name will eventually be. If I have it my way, Spamela Anderson (hog), Jerry Swinefeld (‘nuther hog), Ferris Muler (um…yeah,..mule), Harry Ass Truman (donkey…democrate…Truman…get it?), and James Squirrel Jones (I really don’t have to tell you, right?) will have a little competition in the creative name game.

Let’s see…Thomas Wolfe is a bit too obvious. Blitzer? As in Wolf Blitzer? We’re getting warm…

(Stay tuned. I think we all have more to learn here, the least of which will be what his eventual name might be.) 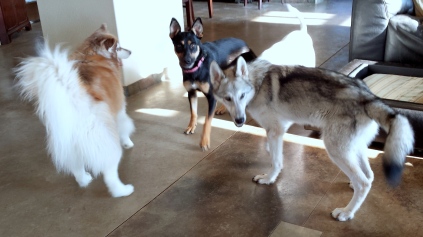 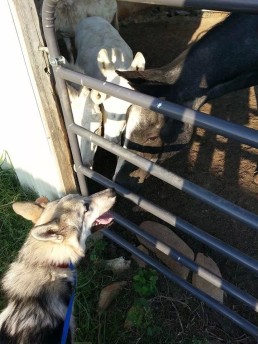 He was very cautious around these guys…smart wolfdog! They’ll trounce you!