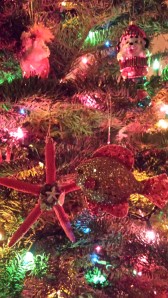 Today is December 26. The day after THE day. I am enjoying a chocolate truffle for breakfast (don’t judge) as I survey the aftermath of yet another great Christmas.

I could put gifts away. I could pack unused wrapping paper, gift bags, and boxes into well-organized storage bins to be ready for next year (made myself laugh with that one!). I could even start taking decorations down instead of leaving them up until Valentine’s Day. Instead, I grab another truffle (it is NOT time for New Year’s resolutions yet) and let my mind take a little journey with the ghost of Christmas past to see if I can answer a question that was posed to me a few weeks earlier, when the items on my to-do list still numbered greater than the hours left before the arrival of the magical day.

The question? I was asked to describe my favorite Christmas—the best Christmas I could remember.  Hmm. Good question. Perhaps another truffle will help me come up with an answer.

It’s a difficult question because I was a very lucky kid. Christmas was a big deal to my family, always filled with tradition and, frankly, excess. There were huge Christmas Eve dinners followed by the one-gift-on-Christmas-Eve allowance to whet our appetite for the mayhem that would ensue the following morning. There were cookies and milk placed carefully on the mantel just before three excited girls were ushered off to bed.

On Christmas morning, there were always stockings hanging carefully on our bedposts. Santa was very clever. He knew he could buy our weary parents a few extra minutes of peace if those same three excited girls were occupied with small gifts and treats before they even climbed out from beneath the covers. 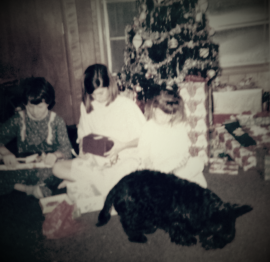 And then there was the rush to see the tree, to find the gifts Santa had left. And oh that clever man! Santa always seemed to get it right—the perfect doll, the most popular game, the most beautiful sweater, a shiny bicycle, and, one year, even a bright blue cowboy hat (Yes, mine—it was a phase).

The Christmas of 1967 comes to mind as a standout. I was six years old and I remember it clearly. A television show called A Family Affair was at the peak of popularity. The show featured three children—twins Buffy and Jody, and their older sister, Sissy—who went to live with their bachelor uncle in his New York City penthouse after their parents were killed in a car accident. While the depressing premise doesn’t suggest it, the show was actually a bit of a sitcom as man-about-town Uncle Bill stumbled into his role as parent to the adorable children with the help of his ever proper butler, Mr. French.

Yes, tragically orphaned children foisted on their unwitting uncle was prime-time family fare “back in the day.” But trust me, it was truly a charming, light-hearted show. Really. The dead parents thing didn’t come into play too often. Ask my therapist.

The true star of the show, in the opinion of every little girl of that era, was Mrs. Beasley, the old-maid doll that was the constant companion to young Buffy. A seemingly unlikely choice, but trust me, it was the must-have doll of the year.

I can still picture the moment when I ran to the tree that Christmas morning, searching for a package that was the right size. There it was…sitting toward the back on the right side of the tree. A box big enough to hold a 20 inch doll with short yellow hair, big blue eyes, black-rimmed granny glasses, and a soft, blue fabric body. OH how the wait for my grandparents to arrive before we could tear into the presents seemed eternal. I sat and talked to Mrs. Beasley through the wrapping paper and box, reassuring her that we would soon be together and that we would be very best friends. And we were. For the next few years, that doll was a fixture in my life. I still have her to this day. She is tucked away carefully, in well-loved, well-worn condition.

But was that my very best Christmas memory? Almost.

Actually, memories of Mrs. Beasley brought to mind another very special doll. But not my doll. To understand the best Christmas I have ever celebrated, we have to hit the rewind button to a Christmas that took place more than 75 years ago.

It was the 1930s and a talented young actress had won the hearts of America. Her name was Shirley Temple. Beginning in 1934, and through the rest of that decade, the perky cherub with the blonde ringlets swiftly became the idol of little girls everywhere, including two sisters living in Nowata, Oklahoma.

These two girls, who would become my mother and my Aunt Martha Lou, received coveted Shirley Temple dolls for Christmas. The must-have toy of their era, the sisters cherished their dolls and kept them into adulthood, much as I have done with my Mrs. Beasley.

The next stop in our journey to my favorite Christmas memory takes us to the early 1950s. Here we find my mother with my oldest sister Cindy, home alone together while my father was away serving in the Korean War. My mother, naively indulging her firstborn, let toddler Cindy play with the delicate Shirley Temple doll. This did not go well. Not well at all. Cindy was none too gentle with poor Shirley.

Now hit fast forward to 2004.  My mom and dad were packing up their house to make the move to a smaller home in a retirement community. My mother was in the early stages of dementia and she and Dad had made the decision that they needed to live where assistance was available should they require it. It was a bittersweet process as we sorted through boxes of memories, deciding what would make the move and what would not. It was then that I found Shirley. She was sealed in a shoe box, and stored on a shelf in my mother’s closet. Shirley, having fallen victim to young Cindy some fifty years earlier, was missing an arm and her remaining limbs were detached from her torso. Her yellow curls had been clumsily shorn. She was dirty and had no clothes. It seemed a sad existence for a once-cherished treasure.

I asked my mother if I could have the doll and then did a little research on eBay. I quickly found that there was a lively market for old Shirley Temple dolls…even dolls in poor condition like the one I had. I decided to list her on the site thinking that if I sold her, someone would take her and restore her, or use her for parts to restore another doll. At least that way, she would not go to waste. She would go to a collector who would care for her.

The doll sold very easily. I carefully packaged her parts and sent her on her way. She was heading to California to a woman who restored antique dolls. Oh Shirley, off to the left coast for a little cosmetic surgery. Typical celebrity.

After sending Shirley away, I must admit I suffered a little seller’s remorse. And then it hit me…if Shirley could be revived, why shouldn’t she be returned to my mom? I contacted the buyer and she told me that my Shirley was actually in decent condition and that she did plan to restore her and sell her again. I didn’t hesitate. I told her about my mother and asked if I could buy Shirley back after her transformation. It was a done deal. We were both very thrilled at the prospect of reuniting my mother with her precious doll.

After months of waiting, the fully restored Shirley finally arrived.  I carefully wrapped her up and placed her inconspicuously beneath my parent’s Christmas tree. I must admit I was nervous. My mother’s dementia played games with her memory and I wondered if she would even recognize this doll as her own. 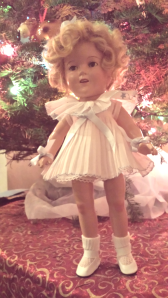 On Christmas morning, our family gathered at my parents’ house. Gifts were passed out, wrapping paper was torn away, tissue paper floated through the air. Then someone handed my mother the box…my present.

I just sat back to watch. Why I didn’t think to raise my camera to preserve the moment, I don’t know. All I know is that my heart was pounding in anticipation of returning this must-have doll to her rightful owner.

Once the moment of surprise passed there were many “how, when, where” questions, lots of laughter and a few more tears. My sister Cindy reached for Shirley to take a closer look and we all cried, “NOOOO,” immediately teasing her for the acts of vandalism her younger self had committed so many years before.

More laughter followed with Mom holding Shirley out of Cindy’s reach, with Cindy finally gingerly holding Shirley to admire her new hand tailored dress, and then with Mom hugging Shirley to her chest in silent thanks. It was the best Christmas morning I had ever experienced and it was all thanks to a recycled doll that had finally come full circle.

We had no way of knowing it, but this would be the last Christmas we would all be together. We lost our dear Cindy the following spring, and then lost Mom a few years later. Shirley is back with me now, safe in my display case awaiting her next Christmas debut. That will be the day when Shirley is wrapped in Christmas paper for the third time and presented to a precious little girl who never met her grandmother Cindy, and does not likely remember much about her great-grandmother.

My great-niece, Elizabeth, does not yet know about Shirley and her history with Cindy and “Gram,” but there are stories to tell. There is this story to share. Then, someday, when she is old enough to care for her, the pretty little doll will travel through time once again to create another treasured holiday moment.

In reality, the best Christmas ever, may be the one still to come.

8 thoughts on “Category: Best Christmas. And the Award Goes To…”