I awoke this morning feeling pretty groggy and sporting bedhead that resembled something befitting a 1960s-country-singing-coal-miner’s-daughter. Not pretty. Stretch, ascertain that all moving parts are indeed moving, and dive into the day. Or crawl. Maybe it’s more like crawl.

Ok, actually, I’m feeling pretty darn good. I just recently celebrated another in an increasing string of birthdays and it’s all good. I have never been one to dwell on the numbers. I am as strong, as young, as vital as I feel. Numbers don’t define me and shouldn’t define anyone.

I know. Running is a good thing. It’s healthy. It keeps muscles lean and strong, it keeps the heart pumping. Most true runners apparently find it to be some sort of spiritual experience. A good run is a zen-like time to meditate, clear the mind, recharge the soul. Yadda, yadda, yadda.

I’m not that runner.

If we get down to the bald truth about me even attempting to move a mile or two at any pace faster than a brisk walk, it’s all about peer pressure. I’m blessed to have a great man in my life who likes adventure—he took me skydiving for one of my forty-something birthdays (it was WONDERFUL!) We also have an amazing group of friends who, and forgive me for being blunt, love to try crazy sh*t.

When I was a mere 50 years old…or, as I prefer to say, nifty years old…one of those crazy friends hooked me and Jim into the idea of running a 5k. Of course it was not just any 5k—it was a zombie mud run 5k. Yes, a race that included being chased by zombies cross country through obstacles. While this may sound a tad insane, my motto has always been, “If you see me running, you should run too,” so a 5K run that included random waves of attacking zombies equaled my perfect motivation to get in shape.

We committed to running the race about five months prior to the event, so I begrudgingly dusted off my running shoes and set out to see if I could even run a mile. Which I could not. I had my work cut out for me.

I plodded along through that summer, giving it my best shot. I did finally manage to run a mile, and then two. I even managed to run 3.1 miles. Well, run is a strong word. I moved at a pace somewhat faster than a walk and I pumped my arms in some sort of running fashion. But hey, it was progress. Yes, at nifty years of age, I was becoming a runner. Sort of. 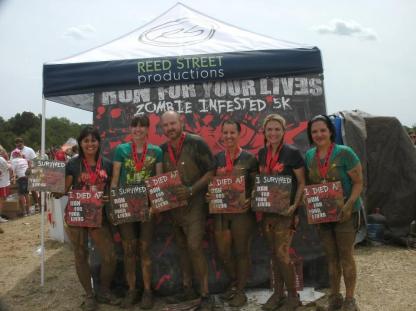 I was not—am not—a good runner. I never found that runner’s high. I hit the fabled “wall” and just fell back on my butt. But I did run in that first 5k. Actually, it was more of a hike on really rough trails through wooded terrain with several quick, hysteria-induced sprints through zombie infested fields followed by slogging through mud pits, crawling through dark tunnels festooned with hot wires, climbing up cargo nets, skidding down water slides, and other “fun-filled” obstacles. We were a sore, soggy, sweaty, muddy bunch by the end of the day. It was an absolute blast!

What’s a little mud? You pay big money for this at fancy spas.

So now I have competed in several zombie races and warrior dashes. I’m still a very reluctant runner, but I have found that I’m fairly good at climbing walls, wading through mud pits and swinging across monkey bars. Who knew? And I can still do a cartwheel. Hurts like hell, but by golly I can do it. That has nothing to do with running, I just felt the need to brag about that.

My crazy, wonderful friends and I just celebrated my nifty-second birthday. Rather than make me run on my special day, they opted to whisk me away to Worlds of Fun in Kansas City where we screamed our way through every head-spinning ride and roller coaster in the place. Did I mention that I love heights, the feeling of falling, and going really, really fast? Kudos once again to my inner five-year-old and the friends willing to humor her.

I’m not really out to prove anything, I’m just out to have a good time. If it seems a little crazy in the process, so be it. The key is that I’m finding out that life is not over just because your new best friend is a little lady I like to call Minnie Pause, who, by the way, beats the daylights out of Miss Struation in my book.

As I head into the second half of my life—perhaps better labeled the third quarter—I’m still ready to try new challenges. I’ll still attempt to be some sort of runner, not because I really want to run, but because I love chasing around with Jim and our wonderful friends. It never fails to be a great time that results in dozens of memorable Facebook tags.

And really, I’m still excited about testing my limits. I guess my theory is that if it doesn’t hurt too terribly much, I’ll continue to go for it. Yeah, “going for it” may someday mean playing shuffleboard instead of heading out to the paintball field, but for now…well, yeah, the next outing is this Saturday. Running around on a paintball field.

Another first. Another fresh set of bruises. Another day of living!