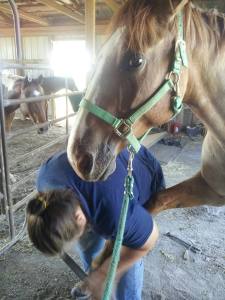 I had the farrier out to trim my horse’s hooves last Sunday. Just a routine, responsible horse owner thing to do. Nothing exciting or profound. Yet this time, this visit from the farrier was special for me. Honestly, it almost didn’t happen because Saturday my horse very nearly died.  And oddly, that was a good thing.

Before I can explain about that, you should know about Scout. Before I can tell you about Scout, you should know a little about me as a scrawny little tomboy. The joke in my family is that my first word was not mommy or daddy, it was horse. Every Christmas wish list had horse at the top. Every birthday candle extinguished by a puff of air from my lungs carried the wish for a horse of my own. I had a huge collection of Breyer model horses that I played with non-stop (and yeah…I still have them). I was a card-carrying member of the “I want a horse” club to which so many little girls belong.

I was a lucky kid. My parents did grant my wish, first by giving me riding lessons and then, oh glorious day, by presenting me with a horse of my own when I was about 12 years old. My horse became a huge part of who I was then, who I am now, and certainly consumed every spare moment I had. The barn was my haven…the place where I was free from the pressures of being a young teenager and where I was surrounded by other girls who were just as horse crazy as I was. It was a great way to grow up.

I have had a number of wonderful horses through the years. Chet was the first and will always hold a special place in my heart. Trigger followed Chet and basically raised me into adulthood. I have never sold a horse. The horses that I choose as mine stay with me until they pass. Trigger lived well into his thirties.

Fast forward more years than I care to admit to Scout. Scout was the horse I have dreamed about my whole life. He was the horse born in a little girl’s imagination. He was very tall, strong, handsome, full of personality and spirit. He was my pal, my silly companion. I bought him when he was just a young colt and planned a lifetime of adventures with him.

And then, in an instant, all of my dreams were crushed. A freak accident, a diagnosis of a severely broken pelvis, a giant horse who stayed calm and trusting through all of the pain. He was only four years old and I had to face my veterinarian and say the hardest words any animal lover has to say…put him down.

There was really no choice to be made. The injury was profound and even if we could have tried to treat him, his other leg would not have held up through the healing process. That’s the tricky part about horses. They seem so big and strong, they carry us with ease, but in reality, they are fragile beings. When you give your heart to horses, along with the undeniable joy, you have to be able to face some unavoidable and seemingly unbearable sorrow.

So as I stood by his side and told him what a wonderful, beautiful, good boy he was, my veterinarian gave the injection that immediately sent my Scout crashing to the ground, but to a place where pain did not haunt him and where he could race free once again.

As much as my heart was broken, the idea of living without a horse to call my own, to ride, to care for…well, that was just an impossible future for me. So the search started for a new friend. I would find a new horse–not to replace Scout, but one to fill the void, to create a new tomorrow with.

I’m picky and I looked at countless nice horses. The right horse for me needed to be a gelding and he needed to be big. I love riding a tall horse. I also like a colorful horse. Scout was a spotted draft horse and I loved paints. The horse that finally really caught my eye was a beautiful light sorrel appaloosa gelding. I visited him, rode him and decided he would come home with me.

I call him Dub and he is a great horse. He is sound, strong, tall, and very handsome. He rides well. He is everything I love about horses. But he is not Scout. Well of course he’s not Scout. The problem is that when I brought Dub home, I guess I really didn’t realize how much my heart was still hurting, how much I was still obsessed with not only Scout’s physical loss, but also his lost potential. The horse of my dreams, gone.

So Dub joined our pasture and our other horses. We took care of him. I visited him, brushed him, fed him. But I did not allow myself to love him. We did not bond. All I seemed to do was pine for Scout. I even contacted his breeder to see if Scout’s dam could be bred back to his sire in the hopes of creating another Scout.

Then Dub almost died. Another freak accident. Dub apparently decided to roll in the dirt as horses often will. When he rolled, however, he was too close to the pasture fence, rolled into it, and his legs became entangled in the wire. Dub was trapped, on his back, on a very hot summer day. If you know anything about horses, you know that this is a deadly situation. Thankfully, I was home. Thankfully, I looked out into the pasture. Thankfully, my partner, Jim, was home with me.

Jim ran for wire cutters, I sprinted out to Dub. I knew I had to be careful not to spook him so I started talking to him as I continued to run. “I’m coming, Dub…hang on big boy…take it easy.” My beautiful horse raised his head to look at me, letting me know that, for the moment, my horse was alive.

We worked quickly to free his legs. Amazingly, Dub stayed calm and did not struggle. Horses often suffer horrible injuries in these situations out of sheer panic. Dub stayed quiet. Once free of the fence he was still in an awkward position and unable to right himself. Jim and I literally had to grab his legs to roll him away from the fence, putting us in a dangerous position as we rolled his legs our direction.

Again, Dub stayed calm. Once away from the fence and able to get his feet under him, he immediately stood up, shook, and trotted a little distance away. The other horses followed him and then they all ran to the barn. The wave of relief in seeing him run was huge. I followed them to the barn so I could check Dub over and access any injuries. Beyond a few minor cuts and scrapes, he was, by all appearances, fine.

Of course with horses, what you can’t see is often the problem. When a horse is cast like that, you run the risk of intestinal torsion–a potentially deadly condition. For the next 24 hours I kept a close eye on Dub for any signs of colic. I sat in the barn with him. I brushed him. I talked to him. I got to know my horse. My horse got to know me.

In that moment when I ran to Dub’s side and he looked up at me from the ground, something changed. There was a connection. I hate to think that it takes a life-threatening emergency for me to wake up and appreciate what I have, but that’s exactly what it took. I opened my mind and my heart and I fell in love with Dub. I think he fell for me at the same time.

Scout is gone. That is still a sad, sore spot for me, and I think it always will be. We can talk about letting go, we can talk about moving on, but there is nothing I can do to trick my mind and emotions into tucking Scout’s memory away and erasing the sorrow of his untimely loss.

What I can do is look forward to a long happy relationship with a really cool appaloosa horse named Dub. I’m sure there are all kinds of lessons to be learned here, conclusions to be drawn, but the lesson I’m going to go with is that I need to get my butt out to the barn and hug my big spotted horse. Anything anyone else draws from this post, well, that’s just the icing on top. Carpe diem, people. Or maybe, more appropriately, that should be carpe equus.